Implementation of a Multi-Agent in a Virtual Maze

This paper presents a Multiagent System (SMA) that controls the morphological status of the graphical user in a 3D virtual world where interaction takes place between the user and the system. The agents of this system can sense the 3D virtual world and represent the result of the deliberation of the SMA in the virtual world.

An agent is an entity that makes decisions on the state of their environment. Its features are: autonomy, cooperation, communication, responsiveness and adaptability [1] [2] [3] [4] [5].

An agent is a continuous time process. Unlike a conventional program which is called the start and end, an agent should run until it has reached with the requested set of objectives, or while your cycle lasts and its user does not want to stop it. The temporal continuity is the property.

That gives ''artificial life'' (simulating life) to the agent, allowing you to be alert to a request or a change in the middle. The life cycle of an agent depends on its characteristics, the tasks performed and the desires of its user in terms of time during which the agent should run.

Consensus or agents perceive their environment. An environment is the space where an agent or a group of them are located.

Usually the agents did not act alone, but are located in environments or platforms with several agents, where each has its own goals, make their own decisions and may have the ability to communicate with other agents. All agents are called multi-agent system.

One of the characteristics of multi-agent systems is that each agent system has a limited view and there is no overall control for the entire system.

The problem addressed in this work is to visualize a multi-agent system in 3D virtual worlds. The graphical representation of the agents is a problem that started to have much weight from the work of Christopher Langton entitled "Artificial Life", creator of the "life-as-we-know-it'' or " life-as-it-Could-be '', this is a study of artificial life through cellular automata [6], suggesting that agents should have a graphical representation.

The emergence of Internet as a communication medium has meant that access to information became easy and fast. Most of this information resides in known Web pages, which often have text and images in two dimensions. The real world is three-dimensional, so that lowering the “Web world” 'a two-dimensional information is lost, hence the desirability of integrating third dimension that allows, for example, tour the facilities of a museum or a university to get the information that will interest the visitor. This is a reality that can be achieved through a Modeling Language VRML virtual reality 1, Java3D and OpenGL.

Virtual worlds are a field related to artificial intelligence. This simulation worlds or environments, called virtual, in which man interacts with the machine in artificial environments like real life. Apart from flight simulators and other applications of this kind serve for years to teaching and practice of certain occupations.


Agent UML (AUML) by James Odell proposes a notation, extended UML to specify protocols for communication and interaction among agents. AUML is a unified modeling language of agents, which has two areas for the development of specifications, which are class diagrams, which specify the internal behavior of an agent and its relationship to the outside using UML class diagrams adapted from these diagrams we find the class-relationship diagrams, and diagrams or protocol interactions, these diagrams are focused on the interaction between the agents. In the diagrams of interactions there are state diagrams, sequence diagrams, diagram of logic iteration. 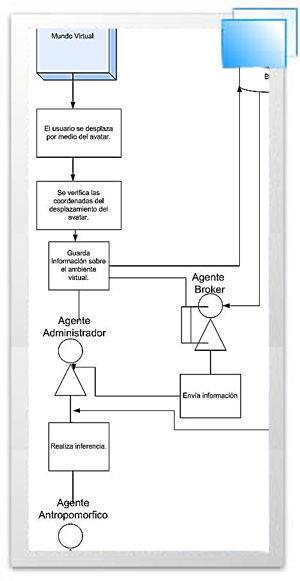 The state diagram shows the different events that take place in a multi-agent system.


For the case study developed a multi-agent system is represented graphically in a virtual world. The virtual world is a 3D maze. For the implementation of this system were used intelligent agents, GUI, database. The agents were implemented under the Jade environment, which were three agents, the manager agent, broker agent and anthropomorphic agent.

The scenario consists of user interaction with the virtual environment, it is intended that there is a graphical representation in the handling of the system.

The user to display the image shows the representation of emotional state in which it is performed while interacting with the virtual environment. 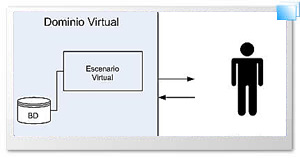 Figure 2, shows the virtual stage connected to the database and the user as part of the interaction of the system, where there is an intelligent system that allows different emotional states based on user interaction.

To solve the above rule it is proposes a multi-agent system in the interaction of a virtual world as shown in Figure 3 below. 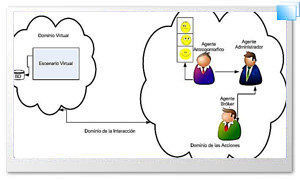 Figure 3. Diagram of the system

The Interaction Domain provides communication between the Virtual Domain and Domain of the Shares. The domain of actions, where the image of anger, sadness and joy is denoted by the Anthropomorphic Agent, will count with the help of two participants called: Broker Agent and Manager Agent. Within the domains that comprise the system are: the virtual domain, the Domain and Domain Interactions of the Shares.

The virtual domain has a virtual stage and a database. The Virtual Stage displays the information generated by the domain of the Shares. The domain contains three police actions, which are the following agents:

At system startup, the user takes the role of Manager Agent, which receives information from the state of the environment. Within this domain are recorded the various changes of states, where states are presented:

The interaction domains play the role of communication between the domain of the Emotions and the virtual domain. Use appropriate language for the interaction of the domains. The interaction domains using a database to make the connection between the Dominion and the Dominion of Virtual Emotions. In the domain of action, the user would like their avatar, be interactive, which is represented in the maze. For this reason you have a domain for the action and the role will be the Anthropomorphic Agent. The Manager Agent creates a mood; this data is sent to the Anthropomorphic Agent for this image to derive an emotion.

The system consists of three parts: the first is the graph that is represented by a 3D virtual world, the second part consists of artificial intelligence and rules made by agents of knowledge and ultimately the integrity of the system is to make the connection between the virtual and multi-agent system.

One of the complex parts of the application was to find the exact spot where you should put the connection code from the virtual world that would result in the graphical representation of the virtual world SMA.

We found multiple jobs like this; try to address the problem of visualization agents. Several have been found to not use a language of the agents. In Addition it has also been used not java3D. In these studies Python has been used or other platform to deploy agents and the graphics used in VRML or OpenGL or other tool. This project addresses the problem of visualization agents with JADE as the platform for agents and the graphics using Java 3D.

[1] Hayes-Roth, B., An architecture for intelligent adaptive system, Cite Seer, 1995.

[4] Franklin, S. AND Graesser, A., Is it an Agent or just a Program? A Taxonomy Autonomous Agents for, Third International Workshop on Agent Theories, 1996, Architectures and Language.